The Sony WF-1000XM3 are fully wireless, intracanal earbuds with active noise canceling, and work for 6 hours on one full charge. They work for 8 if you turn off noise canceling. They have a stylish design, sensor controls, sit comfortably and have the technological bells and whistles you’d expect from Sony. This all sounds excellent.

The release of these earbuds fulfilled almost all of the expectations and announced design choices. Which resulted in a high-quality, unique true wireless model. Let’s begin!

The Sony WF-1000XM3 contents are fairly standard. The earbuds, the charging case, 6 earbud cover pairs, USB-C cable, and various papers. And it’s worth mentioning that three of the cover pairs are silicon and the other three are made of a foamy material. Even though it isn’t “audiophile foam” the noise canceling and comfort are high quality.

Of course, the USB-C plug is excellent. Sony’s keeping pace!

The charging case is relatively large. It’s fairly wide and tall, but thin. It should fit in your pocket, but it still looks large especially compared to the Air Pod case. The bottom of the case is round, so you can only set it on it’s top or side.

The Sony WF-1000XM3 case, and the earbuds themselves, are made from high-quality matted plastic. But it isn’t super light at about 80 grams. The top has a different color than the rest of the case which is unusual.

This case isn’t light, but it’s not the heaviest. The Mifo O5 case is noticeably heavier and is made from metal. But you’ll get used to it.

The earbuds come in two colors: white and black. The lid in both cases is a golden-honey color. The earbuds and the case are easily marked. They easily gather dust, fingerprints, and more.

The Sony WF-1000XM3 earbuds look stylish and pretty. The plastic feels nice, and they have beautiful accents on the sensor panel with the Sony insignia. They’re bigger than many other earbuds. And relatively weighty at 8.5 grams. But, thanks to the ergonomic form, they aren’t hard to take out.

Sony WF-1000XM3 earbuds are comfortable and say in well. According to the manufacturer, during the development phase, they used a “three key points” concept when designing them. The earbuds are securely and comfortably fixed on these points.

They don’t fall out of your ear, especially if you properly pick your cover type. Thanks to three sizes and two different materials, everyone, theoretically, can find the best for them.

Please note that these earbuds aren’t designed for sport and aren’t water-resistant. But they won’t fall out and get lost if you’re jogging.

Your ears won’t hurt after extended use. You might not use them for 5 or 6 hours, but 2 or three no problem. Your ears won’t sweat and nothing will bother you.

They have sensor controls. A single press on the left earbud’s panel will turn the noise canceling on and off.

The absence of volume control on earbuds in this price range is surprising to say the least. You’ll have to take out your phone or “ask” your voice assistant for it. A strange design choice. But, it’s possible, this could be added in future software updates.

Sony WF-1000XM3 sense when they’re taken out. Music will pause itself when you take out 1 (or both) earbuds and resume when put back in. It’s a useful and convenient function.

The sensor panel is small but comfortable. It’s almost impossible to press it accidentally. For better use, you can hold the earbud with your thumb and middle finger and press the buttons with your index.

You can use the Sony WF-1000XM3 app to switch the panels to be more comfortable for lefties.

The Sony WF-1000XM3 earbuds support Bluetooth connection, including Bluetooth 5.0. But there’s only SBC and AAC coder support. The connection is usually reliable. There could be problems if there are a lot of Bluetooth devices nearby. Like in the subway in rush hour. However, this problem is more or less present in all such headphones.

The lack of artX and Sony LDAC is a shame, especially for this price.

Connecting to the source is standard. Take the earbuds out of the case, and they’ll be “visible” in the list of devices and you can connect. They support a fast NFC connection.

Generally speaking, all wireless earbuds connect about the same.

The wireless Sony WF-1000XM3 earbuds connect to your phone in parallel, not separately. Correspondingly, you can use them independently. This, theoretically, improves the reliability of the connection.

Not insignificantly, due to this type of connection, these earbuds don’t have video and sound desync when watching something online. The sound also doesn’t lag in games. These are great signs. When watching YouTube, there might be some slight lag, but it’s pretty rare.

You’ll hear notifications in both ears, which could be uncomfortable. However, if they’re charged differently, you’ll notice.

The Sony QN1e HD processor is responsible for the noise canceling. It also “unpacks” the sound through the coder and similar programming specifics in earbuds.

The active noise canceling (ANC) works excellently. It’s a bit worse than the full-size “flagship” by Sony but better than any other competitor. Besides that, it has a few modes:

Even the name WF-1000XM3 sounds like WP-1000XM3. This was done on purpose to emphasize the headphones’ quality. It seems the previous intracanal model was called WF-1000X, which means they skipped Mark 2.

Many of the Sony WF-1000XM3 parameters can be set using the Sony Headphones Connect app. As I mentioned above, you can change the sensor controls and choose the intensity of noise canceling automatically or by hand.

Other than that, there are sound settings: prepared presets for equalizers and manual settings. That’s where you can turn on and off the DSEE HX sound. Theoretically, this system improves the sound quality of low-quality files.

It seems the system works. It’s best noticed when listening to a streaming service where you don’t have high-quality sound. But if you’re listening to a 320 kb/s mp3 file, there won’t be a difference. But there might be lag since the file has to be “improved” and it’s “heavy”.

One more interesting function of the Sony WF-1000XM3 app is switching between a stable priority connection (SBC) or quality (AAC). The sound is naturally better in the second setting. However, it’s not night and day. The sound is still quite good in stable mode.

The first software had a problem of switching between noise canceling modes too quickly. It was fairly unpleasant to hear. But this problem’s been solved. The software is updated fairly often, which is great.

Of course, the Sony Headphones Connect app can be used to set many parameters from sound filters to auto-switching. The app works well and gives a lot of options.

Sony WF-1000XM3 can work on one charge for 6 hours with noise canceling or 8 without. But, as Sony says, these numbers are given under the conditions of using the priority stable connection and average volume.

The actual results correspond to their announced ones. At a comfortable volume with ANC on, the earbuds work for 5.5 or more hours. It’s not a bad result.

You can charge the earbuds three times in the case. According to “average” use, they can last for a few days without needing to recharge the case. They charge in the case for about 1.5 hours. And the case charges for about 3 hours.

Pay attention to the quick charge function, which charges 1.5 hours of noise canceling on play in just 10 minutes.

The charge port is on the bottom. It’s quite comfortable. But the indicator, on the other side, isn’t comfortable or detailed. The light will be red when there isn’t enough juice for a full charge.

The charge level of the earbuds is shown on the “screen” of your Android-device (more or less accurately), and the app will know when the earbuds are taken out of the case. But you can’t monitor the case’s charge in detail.

The Sony WF-1000XM3 microphone is quite average, so you can use them as a hands-free headset, but it’s best to do so in quiet places. Don’t even try the microphone in noisy transport or near a road. The microphone, like in many true wireless earbuds , and for this model is just “checking a box”.

Despite the absence of high-resolution coder support, the Sony WF-1000XM3’s sound is high-quality and musical. Just by this parameter, they’re better than the majority of analogous models. However, they aren’t supernatural. Are they better than Air Pods? Definitely.

The bass is powerful and accented but doesn’t overpower. It might not be enough for some, of course. The mid frequencies are more or less natural. And the high frequencies don’t peak but are present which is great.

Of course, it doesn’t mean you can buy these and enjoy classical music and jazz to the fullest. It’s good in the background and won’t leave a bad taste. But these earbuds are best for pop and electronic.

Sony WF-1000XM3 are completely wireless intracanal earbuds with active noise canceling, good battery life and sound. The noise canceling works well like true wireless plugs and the app has an exciting design. The earbuds will find its buyers.

It seems Sony is finally ready to be the leader in the noise canceling headphone market in all different types of headphones. Judging by these earbuds, it seems entirely realistic. 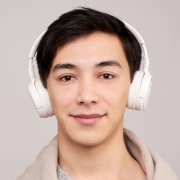 John King is the chief editor of Headphonesking. I play the guitar and love to watch a lot of YouTube. I’m an ordinary guy who likes to try new gadgets. My vision with this website is to help you make the best decision when you're looking to get a new set of headphones.